skip to main | skip to sidebar

This story appeared in the New Scientist a week or two back and has, as they note, generated unprecedented interest. Part of its appeal, and problem, lies in the fact that the drug involved (DCA) is not patented, so development costs might need to be met by charitable or government funds.

Here's the key part of the story:

Evangelos Michelakis of the University of Alberta in Edmonton, Canada,
and his colleagues tested DCA on human cells cultured outside the body
and found that it killed lung, breast and brain cancer cells, but not
healthy cells. Tumours in rats deliberately infected with human cancer
also shrank drastically when they were fed DCA-laced water for several
weeks.

DCA attacks a unique feature of cancer cells: the fact that they make
their energy throughout the main body of the cell, rather than in
distinct organelles called mitochondria. This process, called
glycolysis, is inefficient and uses up vast amounts of sugar. Until
now it had been assumed that cancer cells used glycolysis because
their mitochondria were irreparably damaged. However, Michelakis's
experiments prove this is not the case, because DCA reawakened the
mitochondria in cancer cells. The cells then withered and died (Cancer
Cell, DOI: 10.1016/j.ccr.2006.10.020). 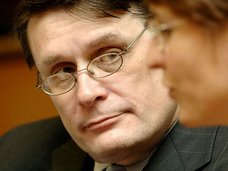 Check out these links